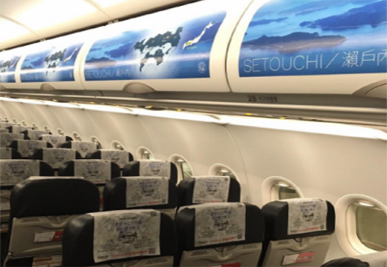 A new airline advertising medium has been up and coming in the past few years. Airplane advertising- Also known as inflight media or ambience media, or just airline advertising. Airlines have been jumping ‘onboard’, one after another tapping into this new lovely revenue stream which pays the airliner extra cash from an audience sitting in their planes. Unlike billboards where the impression times are 3-6 seconds, in-plane ad space command hours of impression time! Types of ad spaces now being sold are:

With these airline advertising type ads giving long impression times, out in the main areas of the plane, these can deliver better than ad spaces in the magazines even. The longest, in-your-face ad space would be the tray tables which would be in front of you the whole duration of your flight. Fine details can be added since they have plenty of time to stare at it. This format should be the hands down #1 pick for any advertisers due to “impression power”.

Here is a handy grid of regions and carriers we now offer:

Also you can view:

Contact us with your new airline ad request for proposal.

DMK airport advertising: What are the media ...