DMK airport advertising: What are the media options? 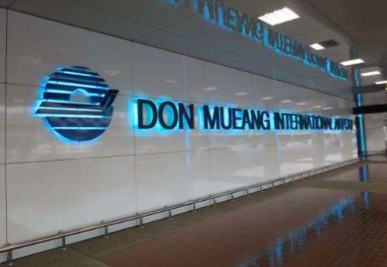 DMK airport advertising? You would think at this once old, run down and previously shut down airport would not have much going on in terms of ad spaces right? Or flights for that matter. That was true… before.However in October 2012, AirAsia was pushed out of Suvarnabhumi Intl  by AOT and told to operate out of DMK due to excessive air traffic and over capacity at BKK airport. In March of 2012 it was only Nok operating at DMK with light traffic. DMK opened back up in March 2007.

Since that time, allot more flights out of DMK ensued. Lots more. Mostly discount airlines such as LionAir, Nok, Orient Thai Smile and others moved into DMK to compete with full service airlines out of BKK. This airport is the “cheapo hub”. Now, many flights are out of DMK covering the whole region. With the huge surge of travelers on discount airlines, DMK is a busy airport! Its a relic of the old Thailand still, with run down corridors and bathrooms still to this day. One terminal was completely renovated and opened in 2016. One terminal is new, one is old looking like something out of a 1985 movie.

But enough of the history. There is some serious traffic going out of DMK now and there are new and existing media formats which can target the new or average Thai and foreign traveler.

Lets look at the rapid rise of traffic at DMK:

As far as media goes, its possible to advertise to a traveling demographic at a max viewership of 2.9 million people per month, assuming you place ads in both terminals of departure and arrivals.

SovereignAd can also provide billboards along the surface street or visible on the toll road going to DMK. Contact us with your RFP.